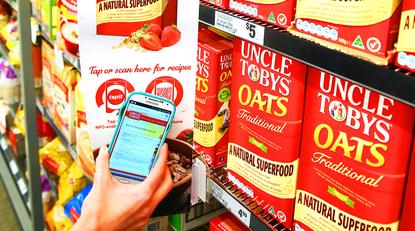 The four-week engagement activity is running across 480 Woolworths supermarkets and marks the launch of the brand’s ‘Oats and Strawberry’ campaign. Consumers tap the enabled aisle fin using their mobile device and gain immediate access to recipe ideas from Woolworths Fresh Magazine.

The initiative is thanks to a partnership between Nestle, NFC communications technology provider, Tapit, and TorchMedia.

In a statement, head of sales for Nestle’s cereals products in Oceania, Dean Carberry, said the Nestle brand was looking for new and innovative ways to drive engagement with shoppers.

“Shelf conversion is a challenge for the Oats category, so we decided to amplify our Oats and Fresh strawberry campaign in Woolworths with a Tapit NFC enabled aisle fin,” he commented. “This will connect shoppers directly with oat and strawberry recipes, developed in partnership with Woolworths Fresh Magazine, to help drive consumption occasions.

“We are excited about this technology, which will enables us to make instant changes throughout the four-week campaign.”

“A big challenge for brands is influencing the sale in the last three feet,” he said. The analytics platform behind Tapit’s mobile technology would also allow the brand to view each physical interaction, much like an online campaign, he added.

According to its website, Tapit has worked with more than 50 major organisations to deploy its contactless technology in outdoor media and retail environments including Coca-Cola, Nike, Johnson & Johnson and Vodafone.

A recent activity was with Westpac, providing bus commuters with new content using the contactless technology.

In another example of the contactless technology being used for advertising, Google launched NFC-enabled billboards last year for its Play app store across Sydney, Melbourne and Brisbane domestic airports, in partnership with oOh! Media.

The search giant has since rolled out billboards across thousands of bus shelters in the US utilising Tapit’s technology.