In advance of ADMA's Global Forum, CMO spoke to the former VP of marketing of Westfield's US operations, Michaela Brockstedt, about reaching both an online and offline audience using Pinterest 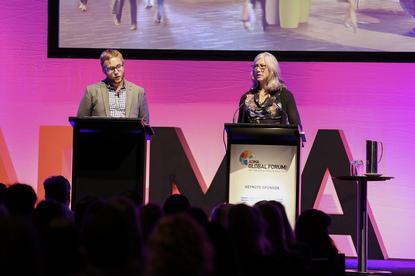 If digital marketing campaigns have one major drawback, it is that they are effectively invisible to anyone who is not using that specific digital service.

Unless of course you find a way to drag the virtual channel into the real world and put it in front of everyone.

And it is something that Michaela Brockstedt managed to do quite effectively in her former role of vice president of marketing for Westfield’s US operations, where she and her in-house design agency found an effective way to reach an online and offline audience using Pinterest.

Brockstedt says her interest in the online image sharing app was initially sparked by research from Westfield’s media agency that showed a close match between the demographics of Pinterest users and a large segment of Westfield shoppers.

“Pinterest users are primarily female, and our shoppers are dominantly female,” Brockstedt says. “And also the median age range, household income and basic demographics like that were very much in alignment.”

That alignment also reached into specific topics which are strongly represented on Pinterest, such as do-it-yourself and craft.

“We realised that if we wanted to be talking to our core customer and our core potential customer, she was certainly talking through Pinterest,” Brockstedt says.

The decision to use Pinterest in a campaign was spurred by the need for Brockstedt and her team to promote the opening of the redevelopment of Westfield’s University Town Center (UTC) mall in La Jolla, in South California.

“While it was a successful center, it certainly had more potential than we were pulling out of it,” Brockstedt says.

“We were trying to figure out how to infuse luxury into that shopping experience. We wanted to figure out a way to do something that was engaging and that was certainly connected to the digital space, but we also wanted it to be something that would be fun for people to interact with on-property during the grand opening festivities.”

Hence it was her desire to do something both online and in the real world which led to the final execution – Pinterest Unplugged.

“Instead of taking something traditional and making it digital, we decided that we would flip the equation and take something digital and make it analog,” Brockstedt says. “That was compelling to us – to get new people introduced to this social media outlet, but also that the people who did love Pinterest and were familiar with it would get really excited because it was real – you could touch it. There was something that made it human again.”

The execution itself consisted of a large format freestanding installation shaped like an open book, which effectively bought two Pinterest pages into the real world, featuring a giant red resin Pinterest pin.

“People just loved it – they loved the physical display because it was really cool looking,” Brockstedt says.

In fact, they loved it so much that the pin has now been stolen four times.

“It’s not small - it’s about 3 or 4 square feet,” Brockstedt says. “But people just walked off with it. I don’t know how they managed to walk out of the shopping center property with it.”

While Brockstedt immediately warmed to the idea of taking a digital property into the real world, her senior managers took a little more convincing – especially as the trend in the advertising industry recently has been to take offline concepts online.

“It’s like taking a blog and turning it into a book,” Brockstedt says. “They were hesitant, but they finally started to understand why it was particularly important that you leave it unadulterated, and that this really was a statement about taking something digital and returning it to its roots.

“We also brought people back to the very simple pleasure of window shopping – of walking up to a little window, looking in it, and going, ‘ooh, cool, what’s in there?’”

Which is not to say that the digital side was ignored completely – Pinterest users could re-pin the digital versions of the displays from the physical Pinterest wall and in doing so put themselves in the running to win everything on the wall, including Oakley sunglasses and a shopping spree at J. Crew. People could also take selfies at the wall which were then displayed on a screen at the Center’s clock tower.

What is most impressive about the project, however, is the speed of execution. Brockstedt estimates that from the green light to the grand reopening was only six weeks.

And while the original budget was only US$8500, Brockstedt was able to argue for a much higher budget by designing an installation that could be easily relocated and reused at other Westfield properties. Hence while the total budget came in at US$48,000, once that cost is spread across all installations the cost comes in under US$6000.

In terms of reach, the installation was also seen by far more than just visitors to La Jolla UTC, thanks to write-ups on Mashable and other sites that generated more than 4 million impressions.

“Advertising is very expensive down in San Diego, so being able to get that much coverage and having people doing segments for our local news in front of it was just fantastic,” Brockstedt says.

Brockstedt has since left her role at Westfield to set up her own branding agency, Brandsavvy.buzz. Her experience with Pinterest Unplugged has gone a long way to informing her belief that it is important that brands not sacrifice physical experiences in favour of a pure digital interaction.

“And those are the things that we don’t spend a lot of time talking about. We’re very aggressive about getting to the sale, and I would argue that if you were as aggressive about giving people an opportunity to enjoy one another’s company, it’d behoove your brand to do so.”

Photo courtesy of the Corner Studio