While paid clicks rose, the cost per click dropped in the second quarter 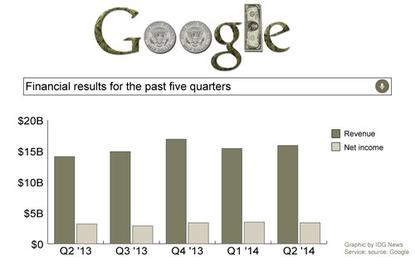 Google's revenue rose to $15.9 billion in the second quarter, while net income was $3.4 billion.

Google's core advertising business helped to propel a 22 percent increase in sales during the second quarter, even while the cost of its ads dropped.

Revenue for the quarter ended June 30 was US$15.96 billion, Google said Thursday, beating the forecast of $15.62 billion, from analysts polled by Thomson Reuters.

The company's earnings per share, excluding certain expenses, was $6.08, a disappointment to analysts expecting $6.24 in earnings.

Thursday's results marked the first time Google separated out the money it makes from ads placed on its own sites like Google.com and YouTube, versus the ads on outside sites.

Still, "Google had a great quarter," CFO Patrick Pichette said in a statement.

The company also said that Nikesh Arora, Google's chief business officer, will be leaving the company after 10 years with Google. He will be replaced for now by Omid Kordestani, Google's business founder, the company said.