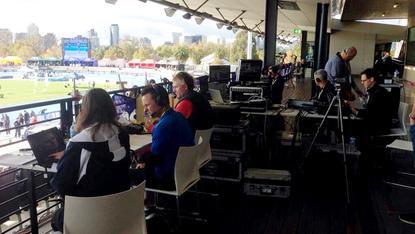 The Australian Little Athletics Championships (ALAC) is a national competition held every year to celebrate the achievements of Australia’s best junior athletes. The event is the culmination of state championships held across the country, which attract more than 105,000 participants.

Historically, the national event has had about 1000 attendees, a far cry from the 3000 to 4000 people who frequent state-level competitions, Little Athletics CEO, Martin Stillman, told CMO. Stillman joined Little Athletics 12 months ago from Tennis Victoria, where he was the cardio and metropolitan tennis manager. His resume includes general manager roles at AFL Victoria, as well as the Australian Motor Sport Federation.

“It’s logical parents, families and friends can get to events in their own state more easily, whereas unfortunately with the national event, we really only have the host state’s family and friends in attendance,” he said. “We wanted to look at an opportunity to take the event around Australia.”

As a way of extending its reach and allowing more friends and family to be involved, Little Athletics looked to live streaming ALAC online, and turned to its member management partner, IMG Sports Technology Group (STG), and its technology partner, Hostworks, for help.

While the initial plan was to launch a live broadcast from 2015, IMG STG and Hostworks were able to come together just weeks before the championship took place on 3 May this year and offer high-definition, live streaming of races using Hostworks’ new Media Foundry suite of services. In total, eight hours of footage was broadcast in high quality and high-definition format to audiences in Australia as well as overseas.

All technical aspects and the on-demand content were managed by Hostworks, while IMG STG was tasked with logistics. Little Athletics was then responsible for program scheduling, liaising on logistics, directing cameras, and filling in the break time between events with content.

ALAC hired two sporting heroes and athletics experts, Brendan Cole and Alex Rowe, to provide informative and relevant commentary through the event. Feeds were also streamed live through to electronic scoreboards around Lakeside Stadium in Melbourne, where the national championships took place.

“This year was 50 years of Little Athletics and for the first time in our national event’s 43-year history, we could showcase the championships,” Stillman said. “On the day, participants were ecstatic.

“The pinnacle of the association is to have this national championship and now all those state participants can see their peers running and competing, which is a very special aspect of this.”

The online broadcast generated more than 4500 views on the Little Athletics’ website, lifting the viewership of the event by 450 per cent. This was despite the fact that the Little Athletics team only had a fortnight to scope the work and about 48 hours to promote the broadcast. Stillman said it used its owned website, as well as Facebook and Twitter, to promote the live streaming service, and asked all states to share that information with their audiences.

“No doubt with the positive feedback... and when we’re able to market this aggressively next year, we’ll see significantly greater numbers and greater reach from 2015 and beyond,” he said.

Having a live streaming capability also presents a range of new sponsorship opportunities for the organisation to capitalise on. “There is scope to seek corporate partnership, which will help offset the costs of doing this,” Stillman said. “It’s another medium to pursue corporate partnership and generate more revenue for the sport.

“But the expenditure was worth every cent; with more time for corporate support and communication, we’re a long way to paying for the coverage.”

State-based centres were also thrilled with the broadcast, and Stillman’s team was inundated with comments on Facebook and other social media channels. At least two states are planning to utilise live streaming for their events next year.

“For Little Athletics and athletics in Australia this is a phenomenal opportunity to get the message out there to more people and showcasing our sport,” he continued. “Athletics has not historically had the prominence in terms of TV coverage, so this will only be beneficial for us as a sport.”

The team behind ALAC has already identified several ways to improve on this year’s coverage, including offering race replays, as well as replays of certain aspects of the day.

Stillman also pointed to the earned media opportunities of having rich media footage available, such as the ability for friends, family and participants to share content through social channels and devices.

“We had stories of grandparents watching their grandchildren run on tablet or iPhone devices, which is just terrific,” he added.