The two companies partner up to deliver a new voice-activated mobile advertising campaign to mark the launch of Universal Sony Home Entertainment's Her film on DVD, Blu-Ray and UltraViolet 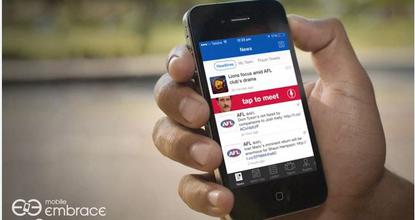 The campaign marks the launch of the movie Her on DVD, Blu-Ray and UltraViolet, and uses voice-activated banner ads to interact with mobile consumers. The idea for the ads stemmed from the movie itself, which focuses on the loving relationship between the film’s lead character, Theodore Twombly (played by Joaquin Phoenix), and an operating system called ‘Samantha’ (played by Scarlett Johansson).

In the film, the advanced operating system promises to be an intuitive entity in its own right, individualised to each user, leading Twombly’s character to fall in love with Samantha.

A Her-branded call to action will feature on banner ads running on Mobile Embrace’s publisher advertising network. After users click on the ad they will hear: ‘Hi, I’m your operating system, but you can call me Samantha'. She then asks three verbal questions and delivers a tailored response based on the consumer’s response. The final interaction promotes the film’s release for home viewing.

The ad technology was supplied by US-based voice recognition software vendor, Nuance Communications, and is claimed to be a first for mobile advertising.

In a statement, Sony Pictures Home Entertainment Australia’s marketing director, Cindy McCulloch, said the company wanted a campaign that made the most of modern day technology and reflected the reliance people have on their mobile phones.

“The use of Nuance voice activated technology ties in with the film Her perfectly, encourages conversation, and being an Australian first initiative, makes this campaign both progressive and innovative, much like the film itself,” she said.

Media agency, Slingshot, said it was tasked by Universal Sony Pictures Home Entertainment Australia to find a cost-effective and innovative way to promote the Oscar and Golden Globe award-winning film.

“Conversation is the most natural form of engagement known to man and by creating a conversation with consumers about the release of Her we have been able to showcase the film and deliver an Australian advertising first at the same time,” said Slingshot managing director, Simon Corbett.

“We know that great creative delivers high engagement and better results for our advertisers,” he said. “This is another creative first for Mobile Embrace and is the first time voice activation technology has been used in the advertising industry to create personalised and entertaining ad formats.”

Nuance’s Voice Ads offering is available now for mobile ad platform and network providers and creative agencies as a Software Development Kit (SDK) that can be integrated into new or existing mobile advertisement campaigns.

Globally, Nuance already has a number of customers using its Voice Ads technology including JetBlue, Toyota, Toys R Us and Best Buy.

JetBlue's mobile voice-based campaign, 'Air on the side of Humanity', was aimed at providing more thoughtful and considered customer service to passengers and featured a pigeon as its mouthpiece.