Google will push mobile app installs in search and YouTube 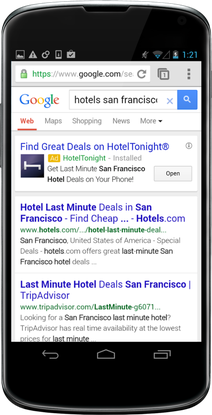 Google users will see more ads directing them into others' mobile apps.

Mobile users of Google's search and YouTube service will soon see more targeted ads that take them straight to the installation pages for advertisers' mobile apps.

Google on Tuesday announced its rollout of targeted mobile app install ads, a growing form of advertising that is a lucrative revenue source for Facebook. Twitter just announced its own program last week.

Businesses can already promote their apps via Google, but app install ads offer a direct way in: Users see a button marked "install" right next to the ad, or "open," if they already have the app but maybe haven't used it in a while. The ads will roll out over the next few months on search and YouTube, as well as across the company's network, Google said.

The technology also includes deep-linking. So if you already have, say, the HotelTonight app on your smartphone, and you search for "hotels in New York" on Google, you might see an ad for the specific page in the HotelTonight app related to New York hotels, Google said.

Behind the scenes, the mobile app ads come courtesy of Google's AdMob network, which helps businesses advertise their apps across Google's network and measure engagement. Advertisers will be able to target their apps to Google users based on the apps they already use, the frequency of use and the types of in-app purchases they make, Google said.

That means if you exercise regularly, and use an app to measure how far you run, Google said, an ad might pop up for an app that tracks the foods you eat and calories consumed.

But a big part of Google's program is nudging people into re-opening apps they may have lost interest in. And that's a big problem for businesses -- about 80 percent of apps are used once and then eventually deleted, according to data cited by Google.