Consumers have the control in digital, says Helen Kellie

While speaking at ad:tech, Helen Kellie says broadcasters need to leverage digital to promote brand and stresses the importance of authenticity 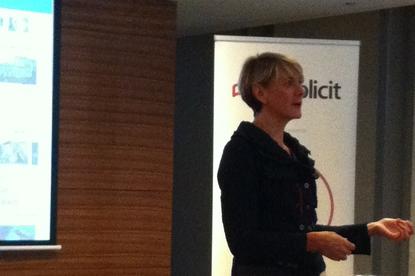 Authenticity is vital for brands in their quest to win over digital audiences and improve interaction, claims SBS CMO, Helen Kellie.

During her presentation at ad:tech, the broadcaster’s director of marketing and platforms shared her own experiences around leveraging the shift to digital to promote brand.

“The importance of brand will resonate and help you find ways to be more successful in your business,” Kellie told attendees.

Kellie believes passionately in audiences and brands, and said the importance of branding is even more apparent in the digital space. But she also warned authenticity in digital marketing is crucial because there’s nowhere to hide.

She cited the recent record-breaking celebrity selfie tweet by Ellen DeGeneres at the Oscars, which was retweeted 2.4 million times. This was the result of a brand partnership between DeGeneres and Samsung, as the tweet was uploaded from a Samsung phone, she said.

“Brilliant results, but there’s a bit of an ‘oops’ moment,” said Kellie, referring to the fact that 12 hours later, the digital space was awash with the news DeGeneres had also been seen tweeting from an iPhone.

“If you want someone to endorse your brand, you can’t just buy a name and slap it on the brand in this day and age, it has to be real,” Kellie claimed. “Ellen has to be a real fan of Samsung and really believe it if this is going to have credibility.

“That authenticity is more important than it’s ever been. And in my mind, looking at all the different examples like this, you’ve only got about 12 hours before #busted begins appearing.”

Kellie, who has also worked for the BBC and Reckitt Benckiser, said one of the main challenges TV executives wrestle today is the shifting expectations and consumption patterns of television audiences that are digital natives. Several SBS programs skewed toward younger audiences are consumed via PVR and on-demand services more often than they are via TV broadcasts.

For Kellie, the concept of ‘instant’ is the real mantra in the digital space. She cited research around on-demand services, which showed 70 per cent of audiences use on-demand because they can access content whenever they want it.

Despite critics claiming SBS’s back-to-back service on SBS2 is counter-intuitive, Kellie added this act of releasing the whole season all at once actively engages audiences, which in turn creates enhanced customer loyalty.

“With audiences who binge on content or watch multiple episodes in one sitting, 80 per cent of them actually get more enjoyment out of the content by watching it in that way… somehow by immersing yourself in the content you get a more intense experience,” she said. “That’s been enormously successful for us.

“We’re finding there’s more stickiness to a season and a series when we offer those multiple ways of viewing.”

The power and drive of viral marketing is another key aspect of the transition to digital, and Kellie spent time discussing how best to maintain ownership of content when it is being recycled on third-party websites. She cited a viral video that featured on SBS’s The Feed, which had 4.6 million views last year, half of which came from a third-party website player.

Unfortunately, branding was delivered at the end of the clip using a ‘from The Feed’ message, which many third-party sites cut off. As a result, more than half of the 4.6 million views didn’t flow back to SBS, either in terms of credit or audience.

Kellie said SBS learned from the missed opportunity and found a way to maintain control and credit for its next viral news clip, regarding a whistleblower on Manus Island. This time around, it built the clip differently to include an SBS presenter, and introduced an SBS watermark to maintain due credit and recognition of the SBS program which broke the story.

“You can’t really cut around the interviewer – but the story was just as provocative, done in the right way, and we also burnt in the branding,” she said.