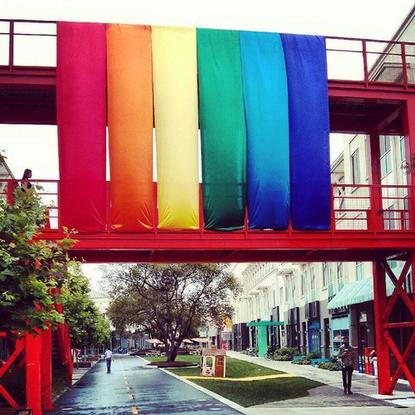 Facebook hangs a rainbow flag at its headquarters in Menlo Park, California.

Facebook, in a move that acknowledges real social issues around gender identity, has updated its site to give people more ways to express their gender.

The changes make available to users a list of roughly 50 different terms they can use to identify themselves. Among them: "Trans," "Trans Female," "Trans Male," "Genderqueer," "Gender Variant" and even "Androgynous," a term used for describing combined male and female characteristics. In addition, users can choose among three pronouns to be used in referring to them: "her," "him" or "them."

Facebook has incorporated privacy controls into the term selections. If users choose one or several of these new options, they can use Facebook's settings to control with whom their new classification is shared, such as 'public' or 'just friends.'

The choice of pronoun, however, is always public. If a person chooses "neutral" for the pronoun, then instead of Facebook saying, "Wish her a happy birthday" on someone's special day, the site will say, "Wish them a happy birthday."

The new options can be accessed from a person's "About" page, by clicking on "Custom" in the drop-down menu for gender.

To make the changes and decide which terms to add, Facebook worked with a group of LGBT advocacy organizations, with the nonprofit Gay & Lesbian Advocates & Defenders, or GLAD, leading the charge. Other groups involved in the effort included The Trevor Project, which provides crisis and suicide prevention services to LGBTQ youth (the "Q" stands for questioning), and the San Francisco-based Transgender Law Center.

Facebook said it made the changes to help people be true to themselves while using the site. "When you come to Facebook to connect with the people, causes, and organizations you care about, we want you to feel comfortable being your true, authentic self," the company said Thursday in an announcement on its Diversity page.

An important part of one's sense of self, Facebook said, is the expression of gender, especially when it extends beyond just "male" or "female."

The move shows that Facebook, a California-based company, is not afraid to take a stand on a controversial issue. A fair number of users seemed supportive of the changes, judging by the more than 2,000 likes generated by the announcement shortly after it was published. Facebook has more than 1.2 billion monthly active users.

Some of Facebook's biggest competitors do not offer a similar gender identification tool. Twitter does not let people express their gender. In addition to "male" and "female," Google Plus only provides an "other" option.

Advertisers on Facebook can choose to target people by gender, but they cannot target people based on any of the new classification terms, a company spokesman said. However, advertisers can target them based on the pronoun they choose.

The choice of one of the new terms doesn't show up as an event on the user's timeline.

Facebook's new gender options are only available in the U.S. right now, but the company is working on rolling them out to other countries.

Facebook already has incorporated some LGBT awareness into how it lets people display their relationship status. Besides the traditional "single" or "in a relationship," users can also choose from "in a civil union" or "in a domestic partnership."

In spite of the new list of options available to them, some users in online comments were already suggesting ways Facebook could apply their new thinking to different areas of the site. For example, the "interested in" field, which lets people express their romantic interests, is still only limited to "women" and "men."