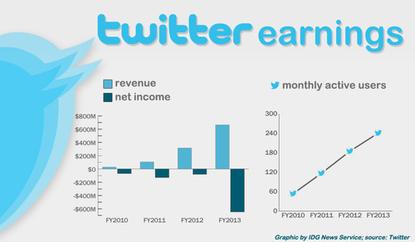 Twitter has reported its first earnings as a public company, revealing that sales more than doubled from a year ago, though it still hasn't managed to turn a profit.

Revenue for the quarter ended December 31 was $US243 million, up 116 per cent from the same quarter a year earlier, Twitter said in its earnings release. That was far higher than the $US218 million analysts had been expecting, according to a poll by Thomson Reuters.

Its loss was a hefty $US511 million, much greater than its loss of $US8.71 million in the fourth quarter of 2012. Excluding share-based compensation and other adjustments, it would have made a profit of $0.02 per share, again better than analysts had expected.

"Twitter finished a great year with our strongest financial quarter to date," CEO Dick Costolo said in a statement.

Still, investors reacted by pushing its shares down nearly 10 per cent in trading after hours, to $US59.60 at the time of this report.

Twitter's advertising revenue totaled $US220 million for the quarter, up 121 per cent from a year earlier. More than 75 per cent of its ad sales were from ads placed on mobile devices, showing Twitter's ability to monetize its site on a critical platform.

It was Twitter's first earnings report since the company went public late last year at $US45 a share. Its IPO documents showed at the time that the company was growing fast but losing money.

Since the IPO, which was viewed as a success, the company has faced questions about its ability to maintain its growth rate and become a more "mainstream" service like Facebook.