Taking another page from social rival Twitter, Facebook is launching a new Trending feature that will show users the most popular topics being discussed on the social network.

The feature, which begins rolling out to users today, will list a series of topics that are spiking in popularity on Facebook. The list will appear in the top right of users' news feeds.

Trending is yet another move in Facebook's plan to supplant Twitter as the social network people rush to when something of high interest -- like the Golden Globe awards, a natural disaster or a significant crime - is happening.

Facebook may be the largest social network, but Twitter has the edge on its rival in one specific area -- immediacy.

Twitter dominates in real-time discussions about high interest events, so if users want to comment on the dress an actress is wearing at an awards event, they'll turn to Twitter. The same goes for users who want to support a political candidate or mock something one of them said during a live debate.

When a national or international event happens, Twitter lights up with activity. It's the site people turn to when they want to vent, comment or check out everyone else's reaction.

Last year, Facebook started to roll out Twitter-like hashtags and began testing Trending Topics, which tracks what users are talking about most on the site.

"Facebook is a space where people from all over the world gather every day to share their thoughts and participate in real-time conversations, from the highlights of the Golden Globes to the passing of Nelson Mandela," wrote Chris Struhar, an engineering manager at Facebook, in a blog post. "Today we're announcing Trending, a new product that's designed to surface interesting and relevant conversations in order to help you discover the best content from all across Facebook." 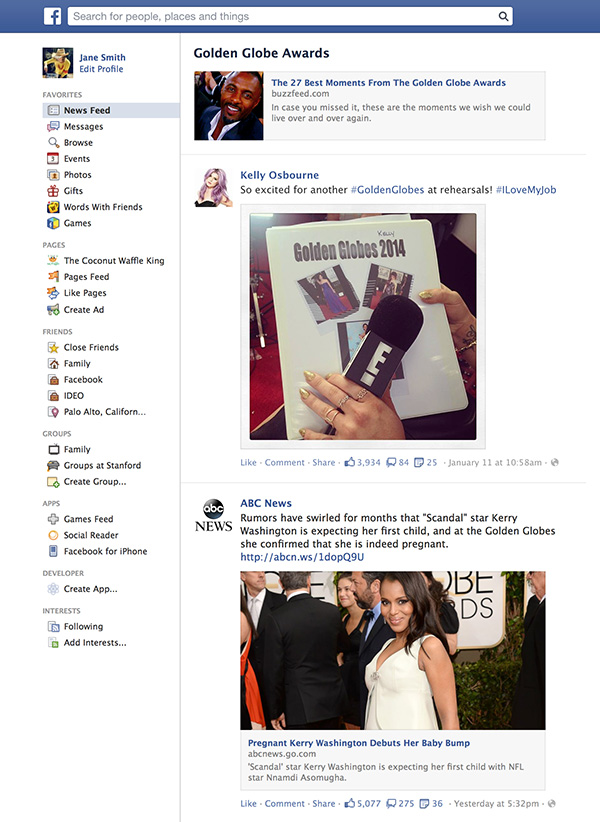 Struhar noted that the Trending results will be personalized to each user's interests.

"Each topic is accompanied by a headline that briefly explains why it is trending," he added. "You can click on any headline to see the most interesting posts from your friends or pages that are talking about that particular topic."

Zeus Kerravala, an analyst with ZK Research, said giving users information about Trending topics is a key step for Facebook to meet its larger goal of becoming the leading hub for online news and events.

"Having it as part of the Facebook homepage means users of Facebook don't need to switch to Google or Twitter," he said. "I do think it's a smart and, in some ways, a mandatory move if Facebook is to truly be the top dog in disseminating news."

There could be a problem however if Facebook users see an interesting Trending topic and then switch over to Twitter to get in on the conversation there.

That could be a dilemma since Facebook has lacked a sense of immediacy about current events, said Ezra Gottheil, an analyst with Current Analysis. He also noted that Facebook is wise to keep adding features to keep the site fresh.

Facebook is working on moving the feature to mobile.