2013 round-up report from the social media site shows rising use of Twitter as a second screening during TV viewing, as well as popularity of the platform for events and politics

TV shows and politics dominated the list of conversations Australian had on Twitter this year, according to the social media site’s 2013 round-up.

The Year on Twitter annual report found the Australian event that created the biggest spike in Twitter conversation this year was a TV moment, when Dami IM won Australian X Factor.

Overall, TV was found to be a significant conversation starter on the social network and reflected the rise of second screening across Australian consumers. Key shows were users shared real-time tweets were Big Brother, Q&A, The Voice, The Block, The Bachelor, the Logies and My Kitchen Rules.

Given the 2013 Federal Election, it’s no surprise to hear Twitter also reported a big year for politics, led by both Labor Party leadership spills, Kevin Rudd’s return as PM, and the announcement of the 2013 Election via Twitter. Leading the list of top trending topics in this area were #AusPol, #Spill, #AusVotes, #YouDecide9, and ‘Rudd’.

One of the emerging uses of Twitter in Australia is as a reporting service for breaking news and community engagement. Key events included the Brisbane floods, NSW bushfires and global events such as the chemical attacks in Syria and the tsunami in the Philippines.

Sport remains a favourite topic too, with popular hashtags including the #ashes test series, #NRLgf for the NRL grand final, #AFLgf for the AFL grand final and #AusOpen for the Australian tennis tournament.

Other sporting events to experience the highest growth on Twitter during 2013 were #origin, #ALeagueGF, #MelbourneCup, and #GoSocceroos. On the events side, the #royalbaby led the list, followed by #telethon7, ‘Happy New Year’ and ‘Christmas’. Top conversation starters on Twitter included #NowPlaying, #UnpopularOpinionNight, #MentionSomeoneBeautiful, #WhenIWakeUp, #ConfessionNight, and #TonyAbbottFilms.

The rise of TV shows and politics on Twitter’s topic list reflects a new report released by Facebook this week on the top areas of consumer and brand engagement on its social media site. 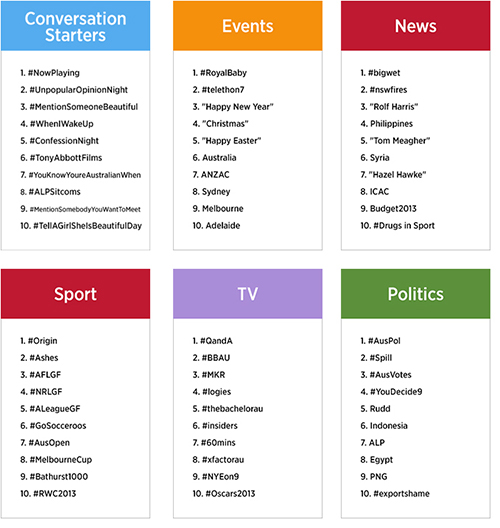