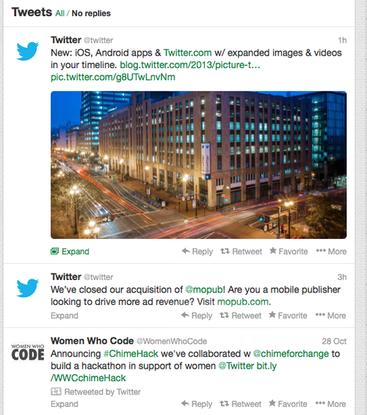 Previews of photos and videos will now appear on users' timeline streams, whereas before people had to click on links to see them. The new feature is available on Twitter's iOS and Android apps, as well as on its Web version.

The changes apply only to photos uploaded using Twitter, and to videos created with Twitter's Vine app. People still have to navigate to an outside page to see photos or videos from third-party services.

Users can expand the photos or watch the videos by tapping them on mobile and clicking on them on the desktop.

With this feature, Twitter wants to provide a more media-rich experience for users, and to better compete against big rivals like Instagram and Snapchat. "These rich tweets can bring your followers closer to what's happening," the company said in its announcement.

But the changes also come as Twitter faces pressure to build out its advertising business, as its public debut on the New York Stock Exchange looms.

Video ads constitute a major element of Twitter's advertising business, which generated 85 percent of the company's revenue last year, the company said on its IPO documents. Placing more video and photo content front and center in users' feeds, therefore, could give marketers an added incentive to advertise with Twitter.

Twitter has already partnered with more than a dozen broadcasters and media networks through its Amplify program, which places promotional video content in users' feeds. Some of those partners include Bloomberg TV, A&E and BBC America.