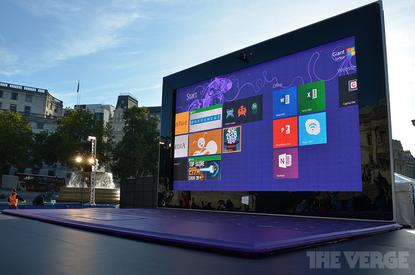 The latest advertising spectacle in that arena, according to The Verge, is a gigantic Surface in London's Trafalgar Square, with a roughly 383-inch display. Visitors can walk up to the oversized Surface and stomp on the attached jumbo keyboard to interact with apps.

It's all powered by an actual Surface 2, connected via USB and Micro-HDMI.

Microsoft has also been painting ads onto buildings in various U.S cities, and is continuing its massive TV ad campaign. A wide-ranging deal with the NFL even gets the Surface logo slapped onto the review booths officials use to judge close plays.

Meanwhile, Microsoft is quietly trying to unload the old Surface Pro as it loudly celebrates its new Surface 2 and Surface Pro 2 tablets.

Engadget reports that the offer will run through the end of the year, or possibly when supplies run out.

Keep in mind that the Surface Pro 2 offers much better battery life than the original Surface Pro--75 percent, Microsoft promises--and it's slightly more powerful thanks to Intel's 4th-generation Core i5 processor. As with the Windows RT-based Surface 2, the Pro 2 also includes a two-stage kickstand that makes the device easier to use in your lap.

Microsoft is downplaying the deal on the original Surface Pro, as it's not even being advertised on the Surface landing page. But, as "Jumbo Surface" in London shows, the company isn't holding back on marketing for its newer devices and the original Surface RT (now simply dubbed "Surface").

Does any of this tempt you to buy?