Onavo's technology will be used to connect more people to the Internet, Facebook said 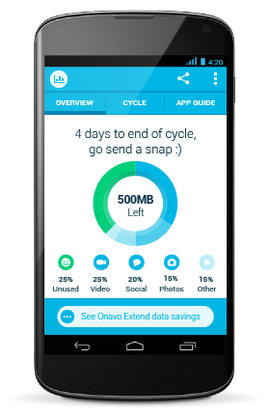 Onavo running on an Android device

Facebook has agreed to acquire mobile data compression startup Onavo and plans to use its technology in an effort to make Internet access more affordable, Facebook said on Monday.

Onavo develops iOS and Android apps that compress data as it is downloaded, helping subscribers save money on their data plans. The technology gives mobile users the ability to do up to five times more with their data plan without any additional fees, according to Onavo.

The Israeli company also offers an analytics tool that allows iOS and Android users to track how much data is consumed by each individual app installed on their phones, although this is something that the latest versions of the phones' operating systems also do.

"We expect Onavo's data compression technology to play a central role in our mission to connect more people to the internet, and their analytic tools will help us provide better, more efficient mobile products," a Facebook spokeswoman said in an emailed statement. Facebook declined to discuss the terms of the deal.

In August 2013, Facebook and other tech companies including Nokia, Samsung Electronics, Ericsson and Qualcomm launched an initiative called Internet.org that aims to connect "the next 5 billion people" to the Internet in an affordable way. The founders believe it is possible to build infrastructure that will provide sustainable free access to basic Internet services in a way that enables everyone with a phone to connect to the Internet.

This is a challenge Onavo is also passionate about, said Onavo co-founders Guy Rosen and Roi Tiger in a blog post. "We're excited to join their team, and hope to play a critical role in reaching one of Internet.org's most significant goals -- using data more efficiently, so that more people around the world can connect and share," they wrote.

Onavo plans to continue running its mobile utility apps as a stand-alone brand when the transaction closes.

Loek is Amsterdam Correspondent and covers online privacy, intellectual property, open-source and online payment issues for the IDG News Service. Follow him on Twitter at @loekessers or email tips and comments to loek_essers@idg.com