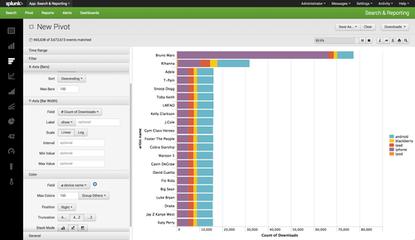 Splunk continues to enhance its flagship machine data search engine so it can be used by business analysts and managers, in addition to its typical audience of system and network administrators.

General business managers may also have a lot to learn from machine data, Mehta explained. For instance, for marketing executives, Splunk could provide a list of what types of smartphones are being using to access an organization's Web application, giving a manager a better idea of which phones to optimize for.

The Splunk search engine made its name for being able to easily search through log files and other forms of machine-generated data, allowing administrators to more easily pinpoint trouble spots or detect operational trends.

For the past few years, Splunk has been adding more business intelligence capabilities to its namesake engine. Mehta would not offer an estimate of the percentage of Splunk's users deploying the software for analyzing data for purposes other than system administration, but did say it was a growing percentage of the user base.

Splunk Pivot can visualize and compare data sets using bar charts, pie charts, gauges and other common formats for data visualization. When the chart is clicked on, Splunk provides access to the underlying data set. Users can also import information from other sources, such as data from relational databases, to add to the data set being examined.

The software also allows users to build data models. The models help users better understand the relationships between different fields of data. The user interface has also been updated to make it easier to personalize.

Splunk 6 brings some to features to those who manage the software as well. Cluster management has been simplified, as has the process of fowarding data to Splunk instances across multiple geographic regions. The software also processes analysis requests up to 1,000 times faster than the previous edition, Splunk 5.

This edition also includes a Web framework designed to provide an easy way to build Splunk-based Web applications, using popular Web technologies such as JavaScript and the Django framework.