Twitter rolls out headlines feature to give tweets more context

The tool will 'surface the stories behind a tweet,' the company said 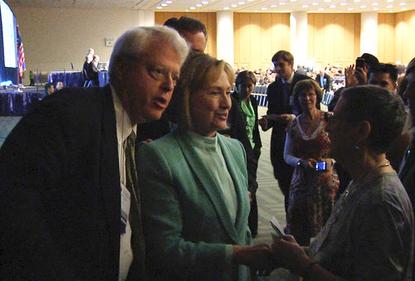 Hillary Clinton speaks to a supporter in San Francisco after receiving an award at the American Bar Association meeting on August 12, 2013.

Twitter has announced a new feature designed to give people a better sense of the context behind the site's characteristically short, 140-character tweets.

The feature is called "related headlines," and it will appear starting Monday as a section within tweets that have been embedded on outside websites. The section will contain lists and links to websites where the tweet was embedded, "making it easier to discover stories that provide more context," Twitter software engineer Brian Wallerstein said in a Monday blog post.

The related headlines section will also appear on a tweet's permalink page, such as within this tweet posted by Hillary Clinton.

The tool, Twitter says, is aimed at surfacing the stories behind a tweet. The company had been testing it for some time before announcing it Monday.

To illustrate how the feature works, a Twitter spokeswoman pointed to the Clinton tweet, which was the first posted by the former secretary of state this past June. The tweet is a bit obtuse -- "Thanks for the inspiration @ASmith83 & @Sllambe -- I'll take it from here," it said.

But under related headlines, there are dozens of links to news articles sporting headlines such as "Hillary Clinton joins Twitter," or "Hillary Clinton starts tweeting," giving a better sense of the tweet's significance.

Twitter cites National Basketball Association center Jason Collins as another example. When Collins became the first NBA player to publicly come out as gay, the news traveled quickly across the social network, Twitter said. As news outlets like ESPN and MSNBC reported the story, they embedded the athlete's tweet while providing additional context that was not available on Twitter, the company said.

The related headlines feature is one tool built on top of Twitter's recently expanded Cards program. The social network announced the changes in April as a way to make tweets more interactive and give developers more ways to embed other types of content into tweets such as mobile app download links, photo galleries and product listings.

Twitter first rolled out its Cards feature in June 2012.

Twitter's related headlines tool could improve the company's ability to compete against Facebook, which has released several new features of its own in recent months aimed at making the site more public. Facebook announced an embed feature last month, to let people insert their posts on Facebook into outside websites. But that tool currently does not offer a related headlines function similar to Twitter's.