We explore three very different approaches to managing social media interaction in real-time at the NRL, Telstra and MasterCard 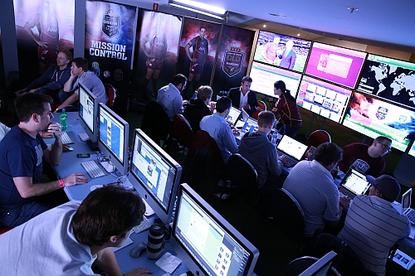 As social media increases in importance as a brand marketing and communication strategy, so too has the need to effectively measure and analyse it, as well as become part of the conversation in real-time. According to Altimeter Group, 42 per cent of companies consider social media monitoring one of their top three priorities for 2013.

To cope, the industry is seeing a rise in the ‘social media command centre’, a dedicated temporary or permanent facility which pools together social management and measuring technologies, digital and social strategists, customer support teams, brand creatives and LED screens into a hub-style environment. These centralised rooms are increasingly proving their worth through better end-user engagement, raising awareness of their products and services and driving new styles of conversation between brand and consumer.

In this article, we delve into three very different examples of a social media command centre to see how brands are utilising both temporary and permanent infrastructure plus technology to drive their social communications to a whole new level.

The State of Origin is the biggest sporting series in Australia; a battle of brawn between New South Wales and Queensland that captures the attention of millions of TV viewers and attracts thousands of event goers every year. Because of the provenance and nature of the game, there is lots of social conversation. But up until this year, game custodian, the NRL, wasn’t able to capture and engage with this information in a real-time way, nor capitalise on any of the potential sponsorship and commercials opportunities available should social’s true worth be measured in an effective manner.

Enter digital marketing agency, VML, and its pop-up ‘Mission Control’ offering. The agency was one of the three key partners who helped Gatorade in 2010 with its social mission control centre, which is well-known from its successes during the US Super Bowl series, and is now offering the same capabilities to Australian companies.

VML MD, Aden Hepburn, told CMO State of Origin social conversation has traditionally been disjointed, and developed organically. The NRL wanted to build a social strategy to aggregate the volume of conversation together and respond to it quickly.

To do so, the NRL opted to unify all social and marketing activity around the #origin hashtag already used by many fans. VML then pulled together customised software platforms to provide a centralised view of conversations across Twitter, Facebook, Instagram, Pinterest and the Web in real-time. This was used to create visualisations across 10 50-inch LED screens, which formed the central hub of the Mission Control room during the three State of Origin games.

Not only was social data viewed in real-time, the VML and NRL team also analysed the game on the fly and pushed out social communications within minutes of a user’s social post or game update.

“We grouped activity into ‘catches’ – one for Queensland, one for New South Wales and one for the NRL voice,” Hepburn said. “Digital strategists then used tools that visualise data to find the influencers of the conversation on the fly, and track conversations to get involved in.”

As well as celebrities and sports stars, the catches check if an individual is an ‘avid’ fan and adds them to the monitoring list. Key posts are briefed into a workflow engine, which a creative team of six people pick up and create content from on the fly using pre-made templates. Content is then picked up by NRL approvers, who vet it, after which community managers post it in real-time.

“From start to finish, it takes as little as five minutes for a custom piece of content that meets call by call plays, game by game plays,” Hepburn said.

The Mission Control centre was tested on a weekly Friday night game and backed by strategies, process documents and training. In terms of staff, VML brings in the technology, creative, project managers, strategists and community managers. “We then field in a couple of NRL guys experienced in the game, to do what they do every day: enhance the quality of the conversation,” Hepburn said.

Traditionally, the NRL measures its success and sells sponsorship on the reach of its games, making broadcast measurements vital. Hepburn said the mission control centre also gauged its success using total reach and engagement in social, chalking up more than 1 billion impressions during the three-game series including 1.8m Twitter hashtag impressions.

“We’re building this [social] as an asset that the NRL can sell into its next rights deal, or as a valuable extra engagement stream,” Hepburn said. “Our job was proving this new revenue stream and commercialising the social community. This deal grows the value of social next year if the NRL wants to offer sponsorship of the social community separately, or bundle a new sponsor strategy together at a higher value.”

'Next up: Telstra and MasterCard's social experiments

Social listening and interaction has proved a surprisingly innovative and engaging way to provide support to Telstra’s customers, its executive director of Telstra Digital, Gerd Shenkel, said. He claimed the telco giant has one of the oldest social media service teams in the country, evolving out of “geeky” online roots into a broader social media and forum offering that seeks to help customers find answers at any time.

Telstra’s social monitoring division was initially created as a support team for the Bigpond brand long before Twitter became a mainstream channel, Shenkel said. Just over two years ago, Telstra invested in making it a 24/7 social media support operation that could not only listen in to conversation, but also actively provide support for its full suite of products. ‘Telstra 24/7’ is now a team of 25 people based in Adelaide, who tune into Facebook, Twitter and online forums, as well as Telstra’s customer-fuelled Crowdsupport online community. 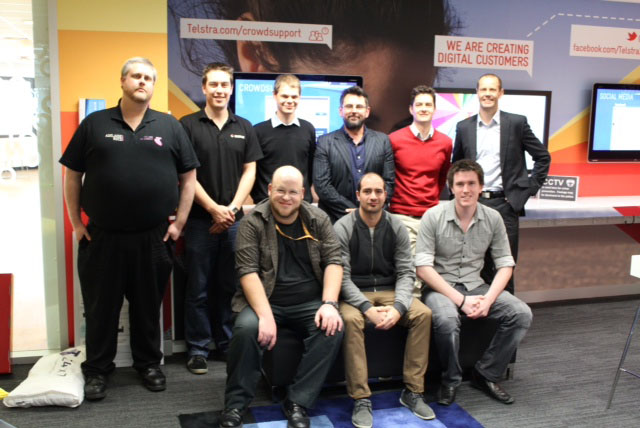 Some of the Telstra Crowdsupport team

The team utilises a recently updated workflow platform to monitor posts across all channels. Employees have a journalism background and receive basic service training on core products, and are also given access to CRM, much in the same way a call centre agent is. A key difference is that these staff members are uniquely networked across the company to find answers to customer questions.

“These people work the organisation for the benefit of customers, and can navigate the network,” Shenkel said. “There is a huge amount of interest across Telstra to get involved, and our teams might direct specialist questions internally to get answers.”

Staff are educated on ACCC rules and misleading statements, but have the freedom to interact with customers through social channels and the forums in a personal way. They are primarily there to provide support, but also create engaging posts and occasionally push out messages relating to new products and features. In the case of the Crowdsupport forum, customers talk to each other, but the 24/7 team steps in to moderate and comment if information is wrong, or hasn’t been responded to for a certain period of time, Shenkel explained.

“Our aim is to keep the conversation fresh,” he said. “Social is at the stage where many customers who haven’t used it before see it as a last resort to engage with us. They’re quite surprised someone is there to help but once they have had a good experience, they’ll come through those channels next time. It’s great to know we can still surprise customers and offer new services where they don’t expect it.”

Staff are gauged on a one-hour service turnaround, and typically achieve at least 90 per cent of the time, Shenkel continued. But he cautioned against too many metrics around social engagement. “Social is changing so much, having specific KPIs to manage it could be counter-productive,” he said. “Social is owned by our customers – they own our Facebook page and our forums and decide where they take it. We are actively resisting over-managing the channel.

“The best measure of success is built into the platforms themselves; the degree to which posts are viable shows by how many people liked, shared or commented on them. We talk to the team about the great posts, and Facebook provides data on likes down to a post level.”

Shenkel said Facebook is becoming a cultural change tool within Telstra, offering customers the ability to access executives and specialists in a direct way that was previously achievable. Telstra has expanded on this is through live blogs and making staff available on Facebook for live chat regularly.

“It allows us to live our values in a platform that makes conversations observable,” he said. “We like to share that with the broader group in Telstra and use what customers tell us in social channels to direct the company.”

Screens and visualisations, while great for the Web and app developers or keeping the customer in the room, aren’t necessary for a team that is living and breathing social every day, Shenkel added.

Social you can bank on: MasterCard’s Conversation Suite

MasterCard set-up its own social media command centre at its Purchase, New York headquarters in 2012 to bring more social thinking into the enterprise. The MasterCard Conversation Suite utilises a Web-based analytics tool supported by a global team of social experts that monitor, analyse and engage in social conversations around the world, in real-time, 24/7. Six dedicated desks are staffed full-time with a cross-functional team, while a 40-foot LED screen allows visitors to see what’s trending and influencing the content produced. 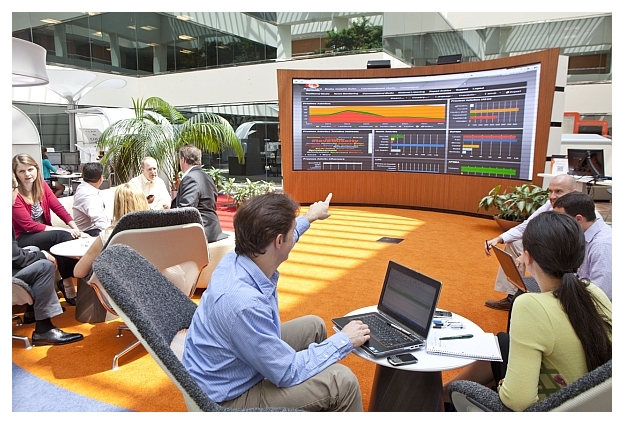 “These channels were chosen because they allow us to get a view into the most pervasive social channels where people are discussing MasterCard,” Cohen said. Traditional media monitoring is also now undertaken through the team.

A customised, proprietary system designed by Prime Research powers the Conversation Suite, which covers 43 markets and 26 languages. Advanced Web intelligence, sentiment analysis, human validation and in-house coding all contribute to making this system the hub of MasterCard’s engagement network, Cohen claimed. Data mining and analysis from the suite drive communications decision making, help set the communications roadmap, enable active response and engagement and serve as a barometer and resource to the business.

“The Conversation Suite represents the changing culture at MasterCard,” she said. “Three years ago, MasterCard CEO, Ajay Banga, challenged his team to transform the 45 year-old B2B financial services giant into a more consumer-focused payments technology company. From a communications standpoint, MasterCard was squarely B2B; the opportunity was to shift engagement online and develop a direct relationship and dialogue with consumers and influencers.”

Early data revealed more than 30 million online conversations were happening weekly about MasterCard and its industry, but MasterCard was engaged in just 1 per cent of these. “Further, commerce – the centre of MasterCard’s business – was shifting online and increasingly via social media channels,” Cohen said.

MasterCard tracks and reports but also aggregates and analyses in real time, building predictive capabilities and producing relevant content. From 30 million monthly touch points across social, digital and online 18 months ago, MasterCard is now seeing more than 40 million a week.

Within three months of implementing the suite, the company had driven a 400 per cent increase in online engagement. Cohen said has also launched a devoted customer service Twitter handle, @AskMasterCard.

MasterCard is now launching the third version of its tool to add new visual capabilities, and incorporate additional social media platforms including Weibo.

“The MasterCard Conversation Suite stands as a reminder that MasterCard continues to evolve and seeks to change the very nature of what people, business and government say about us and believe our value to be,” Cohen said.