“Having a strong community is invaluable,” according to IE Agency's Dean Flynn. 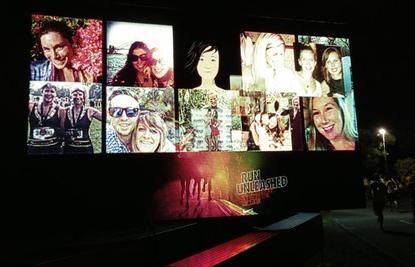 A billboard at Nike's recent 10k run in Sydney displayed participants' Facebook profiles as they ran by. Credit: Nike

Recent Facebook campaigns by Nike and handbag website Sterling & Hyde engaged customers and generated significant buzz for their brands, according to speakers at the MagentoLive conference.

Nike combined Facebook and RFID technology to engage runners at a Nike-sponsored 10k night run in Sydney this past May, according to Dean Flynn, program director of IE Agency, which ran the campaign for Nike.

Sterling & Hyde, a much smaller business, made $7000 in three hours with a Facebook campaign aimed at boosting customer engagement, according to the small business’s owner, Amy Singe.

“Having a strong community is invaluable,” said Flynn. “If you have a community that is engaged with your product, they will do amazing things for you.”

For the Nike campaign, IE Agency posted digital video signs on the track that displayed Facebook profile images of runners and supportive comments from their friends as they crossed various targets on the track. Runners received their final results minutes after crossing the finish line.

The system worked by tracking runners' locations using RFID chips on their shoes and combining the information with data from their Facebook profiles, said Flynn.

The campaign generated 3 million Facebook story impressions, with 700,000 coming on the night of the race, Flynn said. It also resulted in 3000 Instagram shares, he said.

While a campaign like Nike’s required large spending, Sterling & Hyde pulled off an effective Facebook campaign without spending any money.

While driving to work, Singe thought up a compelling Facebook promotion — users could get 50 per cent off any handbag if they agreed to post a customer review and a photograph of themselves holding the bag.

The small independent retailer would make 50 bags available under the promotion on a first-come, first-serve basis. Sterling & Hyde did not pay for ads on Facebook but simply posted the deal to its page.

Because the store discounted bags that had high price margins and paid nothing to Facebook, the cost per acquisition was zero, she said.

While Singe admitted she was initially concerned that some customers might grab the deal and run, without posting a review, no such problem arose. She attributed that in part to the brand loyalty her site has generated—customers felt obligated to keep their end of the bargain.

All 50 of the participants posted customer reviews on the website and 10 per cent blogged about the product they received, she said. Those reviews have made a difference, with the retailer seeing a 15 per cent uptick in conversion rate for products with customer reviews, she said.

Singe believes the promotion worked so well because it was targeted. “We worked really hard to have a small, really engaged audience on Facebook,” she said.