Marketers will be able to target their posts to any segment of LinkedIn's 225 million members, the company said 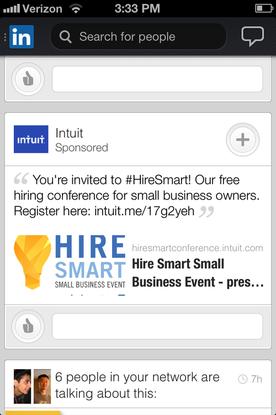 A sponsored post on LinkedIn as it would appear on a user's smartphone.

LinkedIn is giving companies the ability to place their marketing content into users' feeds, in a move that expands the site's revenue opportunities.

LinkedIn, which is traditionally known as a social networking site for professionals, has been testing the program over the past six months with companies like Nissan, Xerox and Adobe. The so-called sponsored updates will be available starting Tuesday to customers who have an account representative and will become available to any business with a company page by the end of the month, said David Hahn, vice president of product management at LinkedIn, in a Tuesday blog post.

The marketing content will be visible on desktop PCs as well as on smartphones and tablet devices, and will clearly be marked "sponsored," appearing in the member's homepage feed along with organic posts from their network and the companies that they already follow, Hahn said.

Telstra jumps in as first Australian company on LinkedIn feeds
Australian businesses not on same social plan as consumers: Report
More Australians are using mobiles to connect to social networks

Users do not have to follow a company to see sponsored posts from it. But members will have the ability to hide specific sponsored updates as they appear in their feed, and LinkedIn may add other functions to the product as more is learned about user behavior, a company spokeswoman said.

While users' homepages will not appear dramatically different, "you may occasionally see sponsored updates in your feed," said Gyanda Sachdeva, who handles product management for the site, in a separate post. Most of users' updates will continue to be organic information coming from their existing network, LinkedIn said.

That division generated sales of roughly US$258 million in 2012, up 66 percent from the previous year, representing 27 percent of total company sales. Sponsored posts will become the core product that will fuel LinkedIn's content marketing strategy, a spokeswoman said.

Marketers on the site "are increasingly leveraging content to inform, educate and inspire their current and prospective customers," Hahn said, but the content does not always reach enough people through businesses' own channels.

The aim of the sponsored updates program is to let businesses engage select communities of LinkedIn members with useful information that can come in the form of an article, blog post, video or presentation, LinkedIn said. Marketers will be able to target any segment of the site's 225 million members based on professional profile data.

One sponsored update from Nissan, for instance, displayed a wide-angle photograph of the company's GT-R sports car on an airfield with fighter jets in the background, with text above it describing the car's inspiration from the U.S. Navy.

There are currently more than 3 million company pages on LinkedIn. Sponsored-update customers who are already signed on include Allstate Insurance, Charles Schwab & Co., General Electric, Mercedes-Benz, The Weinstein Company and Xerox.

Taking promotional content from advertisers and placing it into users' feeds in the form of "sponsored posts" is a common strategy now also employed by Facebook, Twitter and Tumblr. Facebook even lets individual users pay to promote their own posts through its promoted posts program.