Deloitte: The 5 disruptive trends of the digital age 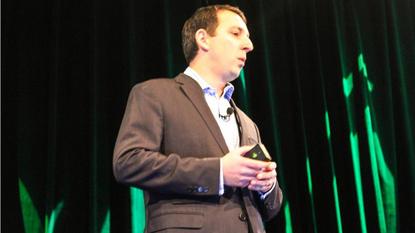 Digital is not just a strategy but actually reshaping business by disrupting the way Australian organisations innovate and interact with customers, Deloitte Australia’s digital leader claims.

Speaking at the Adobe Digital Marketing Symposium in Sydney on 16 July, the professional consulting group’s digital practice team leader, Steve Hallam, identified five key disruptive trends fuelled by the digital revolution, and discussed how both marketers and organisations need to embrace these in order to gain competitive advantage.

Hallam’s observations stemmed from Deloitte’s digital map of the Australian economy released last year, which in turn was based on a macroeconomic report by Access Economics. This research claimed 30 per cent of Australia’s economy will be disrupted in a large way in the next couple of years by digital.

For Deloitte, the beginning of the digital disruption dates from the invention of the Internet Protocol (IP) in 1974. “A host of major inventions and disruptions have already occurred in these last 39 years, and in my view, there is a lot more to come and we’ll see an acceleration of disruption in this space,” Hallam said.

The first trend, mobile, is entering act two of its evolution, Hallam said. In act one, most people adopted mobile and planned its usage in the work channel. Today, organisations are investing heavily in mobile strategies and in some cases, putting forward mobile-specific offerings. Hallam pointed to Evernote’s product offering, which offers unique features and apps depending on the device used by consumers, and said businesses must recognise the unique needs of mobile as well as put mobile at the heart of consumer interaction and innovation.

The second trend, analytics, has come of age and is rewarding those who can utilise data to personalise their messaging and interaction with consumers and customers, Hallam said. He pointed to emerging technologies such as IBM’s Watson, which is making financial decisions about who to approve and who not to pay out to, as examples of how analytics is transforming the way we interpret information.

“We used to recommend personalisation to customers five or six years ago, but it was difficult to get ROI back out of it,” Hallam said. “With the agility of platforms like Adobe, you’re getting access at a lower cost for more output.”

A third trend Hallam highlighted was cloud, and its enablement of connected devices. “You actually can have an experience now across your devices that is consistent,” he said. Google is utilising this, he explained, by allowing people to continue an active search across multiple devices using bookmarked history. “As consumers get used to that, it will influence business as well.”

The fourth disruptive trend outlined in Hallam’s presentation was social, which he said must be treated as an integral part of business and communication, rather than an add-on or optional extra.

“You shouldn’t have a social strategy on the side of your digital business,” he told conference attendees. “Social should in fact be front and centre of everything we do. Unless you are getting your most passionate and ardent supporters integrated into your offering, you’re missing the boat on what social is all about.

“Social has to be very integrated and well thought out through the organisation.”

Deloitte’s CMO David Redhill: A new brand of conversation
Marketers need to work harder to talk the language of the boardroom: AMI and Deloitte

Hallam labelled social the 'new search', with crowdsourcing in particular a way of driving people’s passions with “what you want them to do”.

“We are seeing things like crowd support and crowd sales,” he said. “Crowdsourcing used to be arbitrage, where you tried to get something done cheaper”, but is fast becoming a tool underpinning predictive models for instance.

“The person you are most likely to trust is the person most like you, and that’s where social has come into the mix,” Hallam added. “Amazon has built a business off this… but if you use this as a power in business, it’s very important to align it with expectations.

“What I’d also point is out is that Google is very good at searching when you know the question. What’s impressive about social is that it is going to tell you the answers to the questions you didn’t know to ask.”

The fifth and final trend was cyber, and the security and privacy implications created by the new digital age. “This is one that quite often gets forgotten about, or people leave it until last and then get caught out,” Hallam said.

“You can’t expect to have 90 per cent of your digital transactions in an online channel, and not put some effort into how you will protect that channel as well as secure it.”

If there was one thing he wanted attendees to take away from the presentation, it was that successful digital businesses prioritise new capabilities over old business models, Hallam said. How to make this shift comes down to treasuring the customer relationship.

“You can drive a more efficient business model over digital, but where you really understand, empathise and have great analytics of what the customer is actually doing, you can use that knowledge to introduce revenue sources, and once you’re good at that, then new business models,” Hallam said.

CIO, CMO and the CDO

The rise of these disruptive trends has also changed the nature of the CMO and CIO relationship, which Hallam alluded to as a shotgun wedding. He saw the rise of the chief digital officer role as coming to the fore to bridge the gap between the two.

“CEOs find it very difficult to align CMOs and CIOs, and get them to work together. Where the chief digital officer fits in is helping with that problem,” Hallam said.