It's official: Google buys Waze with an eye toward enhancing Maps

The terms of the deal, which had been expected for several days, were not disclosed 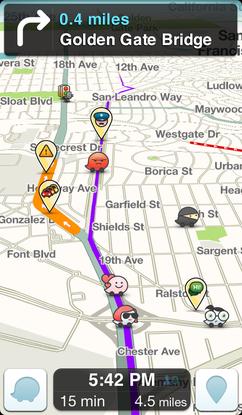 Waze is a crowdsourced mobile app for navigating traffic and roads.

Google is buying the crowdsourced mapping app developer Waze, in a move geared toward adding more real-time navigation tools to its own Maps software, the company announced Tuesday.

The terms of the deal were not disclosed, though early reports had said that the price could be as high as US$1.3 billion.

The idea behind the app, which is available on a range of mobile devices, is to give people a "heads-up" of what's to come on the road. On its homepage, Waze claims to have 30 million users.

"We're excited about the prospect of enhancing Google Maps with some of the traffic update features provided by Waze and enhancing Waze with Google's search capabilities," said Brian McClendon, vice president, Geo at Google, in a blog post.

"We welcome [Waze] to Google and look forward to working with them in our ongoing effort to make a comprehensive, accurate and useful map of the world," he said.

The team at Google "share[s] our vision of a global mapping service, updated in real time by local communities, and wish to help us accelerate," said Waze CEO Noam Bardin, on the company's blog.

"Nothing practical will change here at Waze," Bardin said. "We will maintain our community, brand, service and organization -- the community hierarchy, responsibilities and processes will remain the same."

Bardin acknowledged that Waze had considered "many options" before its acquisition by Google was finalized. Apple and Facebook were two such suitors, reportedly.