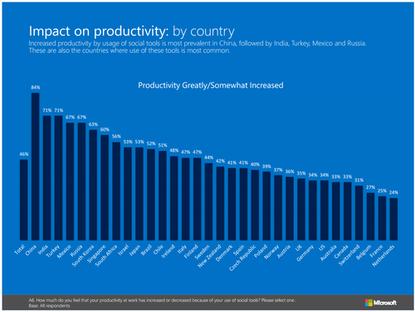 New research released by Microsoft on Tuesday dives into raging debate of whether social tools like Twitter, Microsoft Lync, and Facebook belong in the business realm. Do they enable employees to become more productive, or are they distractions that should be limited in the workplace? The answer, it seems, depends on what country you work in.

A worldwide survey of 9,900 workers conducted by Ipsos on behalf of Microsoft found that workers in China, India, Turkey, and Mexico reported the most productivity gains from using social tools, on the average of from 67 per cent to 84 per cent of those polled. US workers took a much more conservative view, however, with only about a third saying that they were more productive when using social tools.

The US was also among the 23 countries out of 32 that cited security concerns as a reason for restricting social tools in the workplace. Within the remaining nine countries, employers restricted social tools because productivity actually dipped, the survey said.

Most social networks lie outside of Microsoft's domain, with Facebook, Twitter, and others driving conversations around the globe. In the last few years, however, Microsoft has begun injecting itself into those conversations by aggressively integrating social networks like Facebook into the body of information its Bing search engine searches, and forging ties to LinkedIn, foursquare, Quora, and Klout. (Microsoft also has its own social experiment, so.cl.)

Meanwhile, Microsoft bought Yammer for $1.2 billion  last year, and recently said that sales at the collaboration software maker are booming. Microsoft has also added additional pieces, such as voice, video, and text chat provider Skype, tying them to its in-house collaboration engine for businesses, Lync.

Overall, Microsoft said that the survey indicated that workers wanted to use social tools at work, with a third even going so far to say that they would pay for their own social tools -- even though the most popular ones are free. About 77 per cent of those polled said that those tools make them feel more productive, with about 40 per cent saying that the tools had contributed to collaboration among colleagues within the workplace.

"Just as email accelerated the pace of business in the 1990s, enterprise social will be the driver of greater agility and transformation in the 21st century workplace," said Kurt DelBene, president of the Microsoft Office Division, in a statement. "As we look ahead at how collaboration and communications continue to evolve, we believe the tools people use today--email, instant messaging, voice, videoconferencing, social--will come together and be deeply integrated into apps in ways that will speed collaboration and truly transform the way people work."

That's not to say that employers have wholeheartedly embraced social tools, however. Within the United States, for example, 55 per cent of those polled said that social tools are a "distraction" in the workplace, and 49 per cent said that they believed that management looked upon social networks as an intentional or unintentional way to leak sensitive company information.

Microsoft published a summary of its findings on its website.