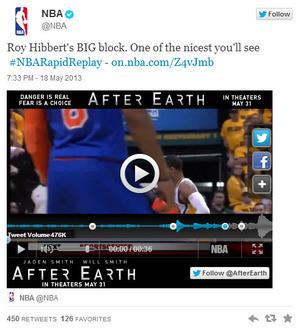 The NBA delivers in-tweet replays during the playoffs

Twitter has rolled out Twitter Amplify, an official program that lets broadcast companies and their advertisers push out promoted tweets.

The move is aimed at tapping into the lucrative second screen market of consumers simultaneously watching TV while interacting through mobile and other devices.

Twitter has already dipped its toes in the water of second-screen partnerships. ESPN and Ford Fusion tweeted instant replays during college football bowl games, and the NCAA offered in-tweet highlights (presented by AT&T and Coke Zero) during March Madness.

Promoted tweets also go beyond sports. BBC America and The Weather Channel (TWC) were among the first to experiment with tweeting custom content. In TWC's case, the use scenario was pushing relevant content to people tweeting about major weather events.

Twitter said the Amplify partnerships will result in tweets that are "timely, brief, and mobile".

"The vast majority of the online public conversation around TV currently happens on Twitter – 95 per cent, according to Crimson Hexagon," Twitter's director of promoted contehnt and sponsorships, Glenn Brown, said in the blog post dated 23 May.

The social network is also drilling down into details that will let its Amplify partners find TV viewers who tweeted about a particular show--and presumably saw the ad that aired during that show--and deliver a promoted tweet to that user, too.

Twitter launched keyword ad targeting last month, so companies can look for words or phrases and have Twitter display a promoted tweet in an active user's timeline.That keyword targeting feature is available to all companies, but broadcasters in the Amplify program can search individual tweets in real time to deliver relevant content.

For example, if a user tweets about the new A&E show Bates Motel, its advertisers can target a tweet to consumers, maybe with an in-tweet video related to the show.

The advantages are obvious for advertisers. Brown said the social network's users will also benefit from the second-screen advertising tactics by receiving "spectacular, timely content that rounds out their TV experience or reminds them to tune in."