Aussie marketing budgets are up along with technology spend: Report

Econsultancy and Responsys' new Marketing Budgets 2013 Report finds more than half of Australian companies are increasing marketing budgets this year, with digital leading the way

More than half of Australian companies are increasing their overall marketing budget this year, and with it their investment into digital marketing technologies, a new survey reports.

According to the latest Marketing Budgets 2013 Report from Econsultancy in partnership with Responsys, 54 per cent of local companies will increase their overall marketing spend in 2013, up from 45 per cent last year. Of this, 71 per cent plan to increase their digital budgets, compared with just one in five raising offline spend.

In an illustration of how marketers plan to further optimise and integrate their channel strategies, the report also found more than three-quarters of companies plan to boost spending on digital marketing technology this year (71 per cent).

The top three types of marketing technology most likely to secure the dollars are analytics (46 per cent), CRM (45 per cent) and content management systems (41 per cent). These were followed by social media management systems, email platforms, paid search/big management, and conversion and optimisation tools.

Click for Responsys' infographic of the report's key findings 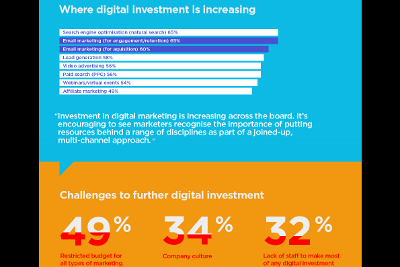 Interestingly, the report authors claim this is because digital is longer seen as significantly more measurable than traditional marketing. Reasons for this include the blurring of the two areas, the rise in social media and video, and the increasing focus of marketers on digital as a branding medium.

Responsys senior marketing and alliances director EMEA, Simon Robinson, used the latest report to claim the end of the mass marketing era and the rise of relationship-based marketing. With it comes the need for new skill sets and smarter cross-channel programs that resonate with the consumer.

“To succeed, companies will need to flip their approach to marketing on its head and design cross-channel strategies to deliver long-term relationships, not short-term transactions,” he said.

“The good news is that marketing budgets are shifting accordingly. Successful marketers in the relationship era will be those who dedicate more resources toward forging real, individual relationships with their prospects and customers.”

The report was based on a survey of 800 marketers between December and January and is the fourth edition of Econsultancy and Responsys’ annual research.

The skills gap: Other report findings: